A journey through history accompanied by knights, ladies,musicians and steeds. Five “Rioni” (districts of the city) challengingeach other to win the Palio (the standard), the most desired trophy.And then exciting flags competitions framed in one of the mostbeautiful Italian squares. And again: evocative propitiatory dinners,historical reenactments, food stands and entertainment evenings forthe whole month of the competition. All this is the Niballo – Palio of Faenza.Since 1959, the Niballo Palio of Faenza has been held on the fourthSunday of June and represents much more than a simplecompetition: it is the constant renewal of a tradition that has its rootsin Medieval and Renaissance Faenza and that still today does notcease to excite with its colors, music and exciting challenges. “Capi rione (Heads of districts), men of the parade, be worthy ofyour colors and the beauty of your ladies. Go to the field tochallenge the tournament!”, With these words the “Maestro di Campo” (Master of Field) gives the start to the historical parade that will lead the knights of the five Rioni to challenge each other at Bruno Neri stadium:

YOUR EMOTIONS, OUR STORY 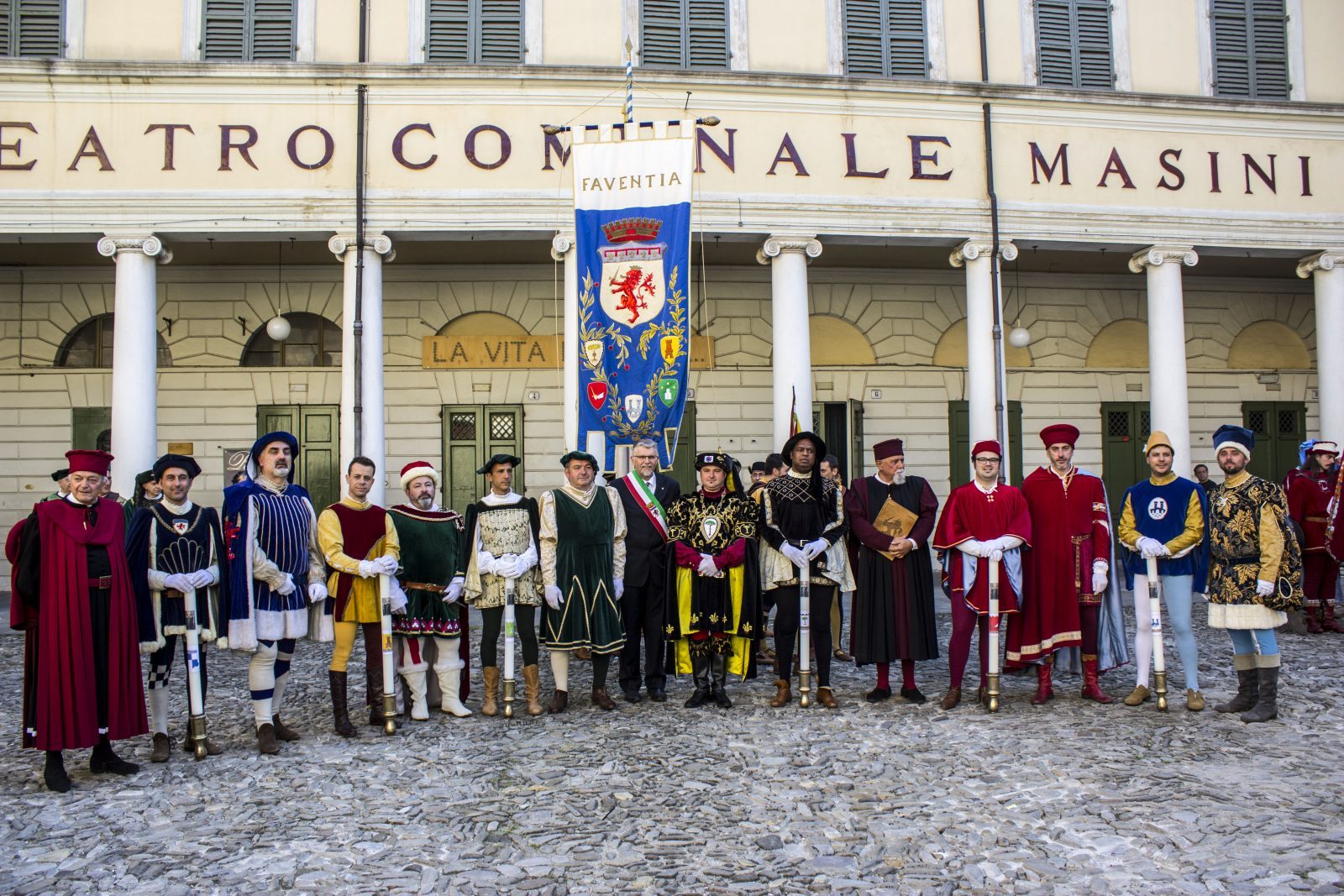 During this week every “Rione” organizes entertainment evenings in its headquarter around gastronomy and social activity open to the city. The whole activities involve volunteers: members and passionates

On Friday preceding Bigorda d’Oro and Saturday preceding Niballo-Palio di Faenza, “Rioni” organize in their headquarter lucullan dinners and propitiatory for the knight and Rioni people. It is a kind of collective superstitious ritual, invoking good fortune whileenjoying great food

It is a tradition that in the festivity preceding the challenge of the Niballo-Palio of Faenza, “Capi Rioni” and the contenders who will dispute the Palio take the oath to respect the rules imposed by the cavalry and to fight loyally for the colors of their own Rione. The oath take place in Piazza del Popolo, in front of the “Magistrato dei
Rioni” (Magistrate of Rioni) and “Maestro di Campo”.
Before this ceremony a flag wavers competition take place in “Pairs“ discipline. On the 3rd Saturday of June the flag wavers competition involve then “Single”, “Small team” and “Big team” disciplines.

The word “Bigorda” recalls the wooden lance used in the past during the knightly tournament. “Bigorda d’Oro” tournament is open by a historic parade and it is known since 1997 as Young people Palio challenged by the young knights of the 5 Rioni. During the years its popularity is keeping on growing.

Niballo – Palio di Faenza is one of the most ancient Italian Medieval Tournaments. Also known as “Giostra del Barbarossa” and “Quintana del Niballo”, takes its origins in 1164, during the passage of Emperor Federico Barbarossa in Faenza as guest of Enrico and Guido Manfredi, notable citizens of the city. According to several historic documents, “Quintana del Niballo” took place from XVII Century and until 1796 whereas the modern Palio starts in 1959. Niballo-Palio di Faenza take place on the fourth Sunday in June. As per tradition, every competition is open by a historic parade as reenactment of military, civil and social life in the XV Century. The parade starts in Piazza del Popolo at 4.00 pm along the city-center streets until the Stadium.