A charming artistic city of Roman origin, Faenza is located close to the hills marking the border with Romagna and Tuscany, a link between Florence and Ravenna. If there is little architectural evidence of its medieval period (such as in the Church of Sant’Ippolito and inthe churches of S. Maria Foris Porta and Commenda), the city experienced its period of greatest splendor in the 16th century, thanks to the work of the great artists such as Giuliano and Benedetto da Maiano, Donatello, the Della Robbia and Biagio d’Antonio from Florence who moved to Romagna for work. The main architectural works that can be admired by walking around the city are therefore a legacy of the artistic flourishing the city experienced during the Renaissance. Once in Faenza visitors can experience a walk between the Renaissance and the Neoclassical, as evidenced by the numerous and elegant buildings along the streets of the historic center, among which Palazzo Milzetti stands out. The neoclassical golden period date back between 1780 and 1820, when architecture, sculpture, painting and decoration achieved results of unparalleled level thanks to the work of the architects Giuseppe Pistocchi and Giovanni Antonio Antolini and the artist Felice Giani.

WHY TO VISIT FAENZA 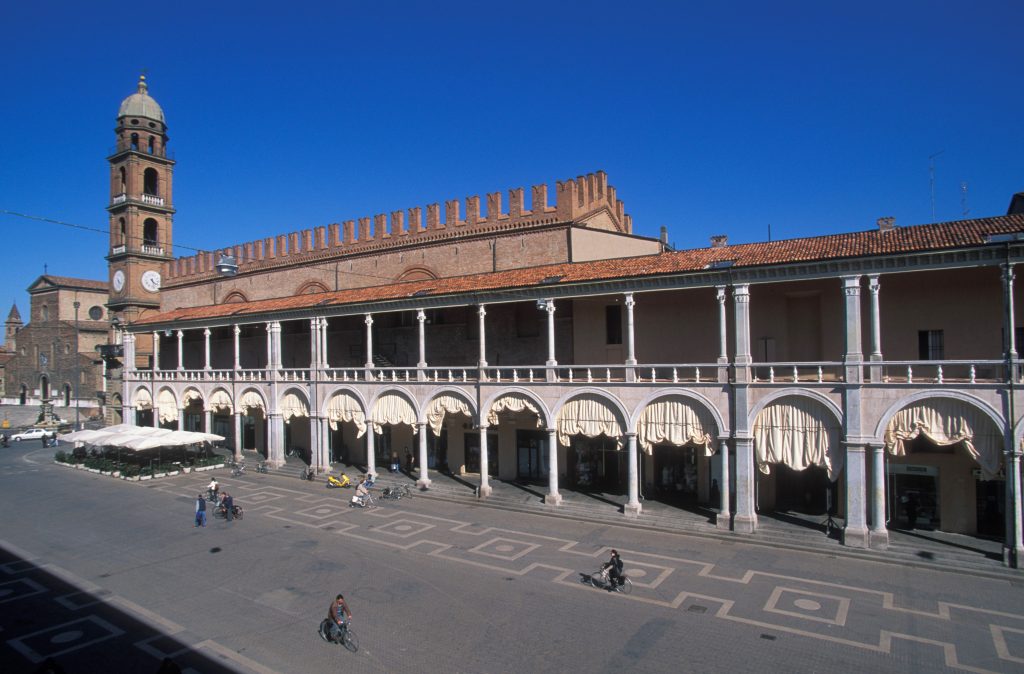 Since the 14th century, Faenza has been an important political and cultural crossroads, also thanks to the key role of the Manfredi lordship in building important ties with the Medici family of Florence. It is enough to arrive in the amazing Piazza del Popolo, bounded by its side porticos and loggias to admire the Palazzo del Podestà, enlarged in 1230-70 and revised in modern age (the portico is a seven-nineteenth century work), the nearby Clock Tower rebuilt in 1953, and Palazzo Manfredi, originally from the 13th century. The entire loggia of Palazzo Manfredi was then rebuilt in 1859 in neoclassical forms – similar to the original ones – by the municipal engineer Ignazio Bosi. On the side of Palazzo del Podestà, there is a two-storey loggia from 1760. The initial project involved the construction of a single floor but the Council of Elders wanted it on two floors for symmetry with the front porch. This decision projects the structure of the square towards a typically eighteenth-century concept of architectural regularity. In the neighboring Piazza della Libertà it is instead possible to stop and contemplate the fountain of the early 17th century or to visit the Cathedral of San Pietro (late 15th century).

Other place to visit 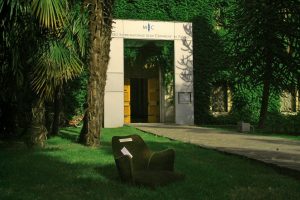 Founded in 1908 by Gaetano Ballardini, the International Ceramics Museum has the largest collection in the world dedicated to ceramics. In addition to artworks of Italian and European production covering the period from the Middle Age to the nineteenth century, the MIC also houses important sections dedicated to pre-Columbian America, classical Greece and the Roman age, as well as artworks from the near and middle East and Islamic ceramics. Inside, there are also sections dedicated to the most important twentieth century and contemporary ceramic artists, both Italian and foreign.

Recognized as a symbol of peace by UNESCO, since 1938 the MIC has been producing the Faenza Prize Competition, which become international in 1963. Starting from its last three editions, the competition is reserved to young artists under 40 and is considered one of the highest ceramic awards in the world. 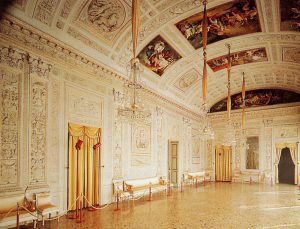 Ancient and elegant neoclassical building, Palazzo Milzetti was the home of Milzetti counts and is now the seat of the National Museum of Neoclassical age in Romagna. Count Nicola Milzetti started the construction in 1792 by entrusting the work to the Faentine architect Giuseppe Pistocchi. Works then continued with his son Francesco, who gave commission the architect Giovanni Antonio Antolini from Castel Bolognese and the painter Felice Giani. On the ground floor it is possible to discover the rooms where Count Francesco Milzetti lived and the library . Among the various rooms to visit, there is the the dining roo, characterized by two long walls with barely visible apses, decorated with vine leaf and acorn motifs, then the Octagonal Room called Temple of Apollo and the Achilles Gallery, with a lowered vault with surfaces covered by an uniterruped decoration. Finally, the bedroom of the spouses, dedicated to the story of Ulysses’ return home and Penelope’s loyalty, with nineteenth-century silks on the walls. 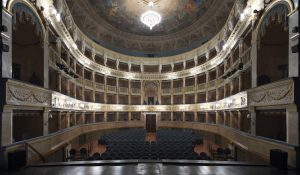 One of the most representative examples of neoclassical architecture in Italy, the Masini Theater recalls with the theater of the Royal Palace in Caserta (for the giant order of the colonnade) the Palace of Versailles (for the motif of the bas-reliefs that adorn the second order of boxes) and the Teatro Olimpico in Vicenza (for the theme of the statues above the colonnade). Its construction began in 1780 and was completed in 1787 on the Accademia dei Remoti‘s initiative, a meeting place for local intellectuals and artists established in 1673. The first theater, dating back to 1720, was built using the pre-existing Podestà Hall but due to the poor construction materials, it deteriorated rapidly. The opening of the present theater took place in 1788 with the representation of the opera “Caio Ostilio” by Giuseppe Giordani. Over the years, the theater was subject to various maintenance and labor, in order to correct its defects and make it suitable for the needs of the shows.

Known all over the world for its ancient tradition of ceramic craftsmanship, it is not just a coincidence if internationally majolica is identified with the name Faience. The origins of ceramic production date back to the 1st century AD, but Faenza tradition is still active today, with sixty artistic workshops, art schools and international events.

Here ceramic art combines the contemporary with the tradition: just taking a tour of the various ateliers around the city streets it is way to understand how the majolica tradition has evolved over time to different and contemporary productions. Each ceramic workshop is a small world, with ceramists intent on shaping the clay (white or red), painting it and cooking it in ovens that reach 960°C. Plates, cups, furnishing objects: a full the choice not disappoint your expectations.

Events and typical products of the territory

Faenza is an active city all year long thanks not only to events related to ceramics making it in constant cultural buzz. Argillà, the international ceramics fair, liven up the center streets every September and every two years. Another high-profile event is the 100km Passatore, a running race that takes place at the end of May along the Florence-Faenza route.

Faenza means Romagna, or the art of hospitality, of eating and drinking well. Romagna conviviality is one of the souvenirs that you can take home with you along with the precious majolica from Faenza. In addition to the classic tradition of home-made pasta, such as cappelletti and passatelli, in Faenza it is possible to find other products from the territory of controlled denomination, such as piadina, squacquerone cheese, shallot and wines well-known throughout Italy and the world: from the COD varieties of Sangiovese, Trebbiano, Pagadebit and Cagnina, to the GCOD Albana in a sweet, dry and also passito version.