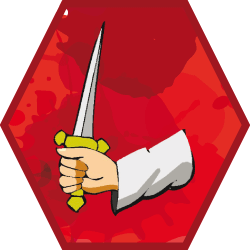 Area: Between the norther side of Ravegnana street, Garibaldi avenue, Mazzini avenue and Oberdan-Emilia Ponente street

Head of the district: Gianluca Maiardi 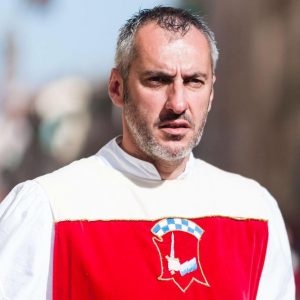 The emblem of Rione Rosso, with its bright color and Renaissance rapier recalls the combative nature of this district, which has always been devoted to confrontation and victory. It is therefore no coincidence that the Rosso is the Rione di Porta Imolese, the access point to the city that has most seen clashes and battles over the centuries: With medieval origin, it was restructured in 1678 but about a century later it was the protagonist of the Battle of the Senio, when the French invaded the city (1793). In 1944 the retreating Germans undermined the Gate to slow down the Allied army’s advance, which is why only the walls on Via Tolosano have been saved. One of the representations of the local coat of arms also presents an upper band with a blue and white checkerboard, a reference to the House of Accarisi, irreducible adversaries of the Manfredis of the Ghibelline part who had their own palace in this Rione. 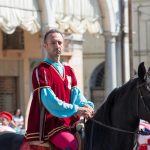 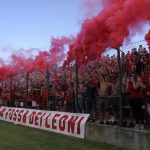 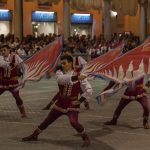 The district is also rich in history, which once housed the Convent of the Sisters of Santa Chiara, after the Unity of Italy turned into a military hospital and almost completely destroyed during the last world war. But the real strength of the neighborhood is the underground room, called “Baiocco” from the name of an ancient local currency, today used as multipurpose rooms suitable for hosting exhibitions, conferences, shows and Renaissance dinners. Inside the complex we also find the premises of the recreational club and the area with the ancient tower where silk was once dried. On the upper floor there are the “Noble Rooms” where the costumes are exhibited and on the occasion of the Palio, are used for dressing the characters that make up the historical parade: eighty participants, among which the representatives of the five stand out noble houses of the Rione (in addition to the Accarisi, Pasi, Rogati and Ubaldini families), the hunting scene formed by the greyhound door and the falconer, the parade horses mounted by a brass holder, Lady and Knight, and the two leaders of the armed men who wear iron jerseys. Not to forget the commitment of the Musician e Flag-wavers Group which are called in various European countries, being recognized as winners of various national and world titles in the championships organized by the FISB (Italian Federation of Flag-wavers ).