The Bigorda d’Oro Tournament was born in 1997 as the Palio for the young people, played between the five districts of Faenza according to the same rules foreseen by the jousting tournament of Niballo. The fame of the knights of Faenza does not spread throughout Italy by chance: inside the local stables, young jockeys get trained day by day, to dispute the Niballo tournament in the future: Bigorda d’Oro tournament was born also to verify and test their skill. Unlike the Niballo it is played in the evening during the second week of June. 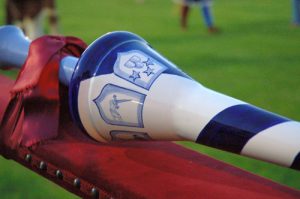 The name Bigorda comes from the Provençal language – the language spoken by medieval troubadours – and more precisely from the ancient term “beort”, which means tinkering in the tournament. The same term refers to the light type lance used in modern knightly rides. It should therefore come as no surprise that the prize for the victory of the Palio of young people is a ceramic lance, with a golden tip. The Bigorda is then a first opportunity to challenge the five city districts, waiting for the traditional ride at the end of June. More and more young jockeys winners of a Bigorda plays a few years later in the Palio del Niballo.